A simple conversation in French 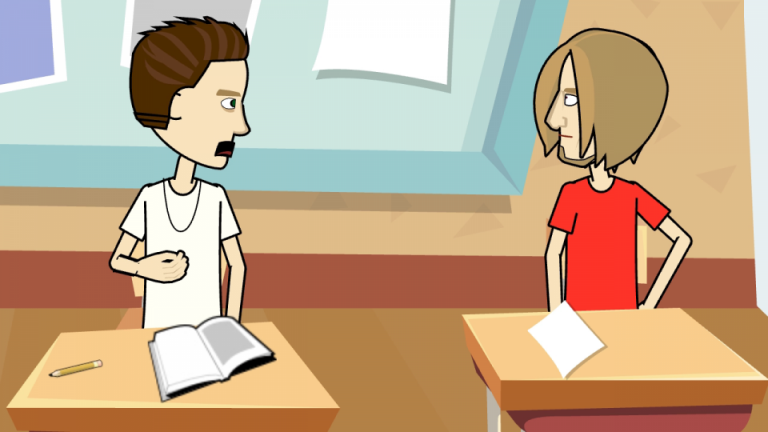 Alex and Christophe are in class listening to the teacher.  Christophe turns to Alex and asks if he can borrow his pen.  Alex lends him one. Christophe then wants to borrow more things from Alex.  It seems he didn’t bring his school bag.  But Christophe is about to cross the line …

Videos in this lesson

This section is optional and meant for students with a good French reading level. The notes below help you acquire a more in-depth understanding of the French phrases used in the video.  Going through these notes, however, is NOT a requirement for improving your spoken French.

In France, we often use the expression “dis donc!” to grab someone’s attention.  We often use it when we’re about to say something we consider important or unusual.  For example you may say “hé dis donc! Tu as vu ces nuages noirs! Je crois qu’il va pleuvoir !”

In this simple conversation in French, Christophe just uses the expression to get Alex’s attention because he wants to borrow a pen.

Note that in the conversation Christophe actually says “t’aurais pas un autre stylo ?” instead of “tu n’aurais pas”.  In informal, spoken French, the “ne” or “n’ ” of the negation is often omitted, although not grammatically correct.  Also, the “tu” is contracted into a ” t’ “, which is also very colloquial.

In this simple conversation in French, when Alex lends a pen to Christophe he says “tiens, en voilà un“.  This is a common phrase we use when handing something to someone.  “Tiens” is a very common thing to say when passing something to a person. For example you may hand someone a screwdriver saying “tiens, voila un tournevis.”

“En voilà un” is another way of saying “here is the object you need, that I’m handing to you”.  It sometimes suggests we have more of it, we’re just handing one of them.  In the dialogue, Alex says “en voilà un” referring to the extra pen he’s handing Christophe.  You may also use “en voilà un” to point to something you are talking about.

For example, you are driving on the road and telling someone there are many rabbits in the area.  Then you spot one and say : “Regarde ! En voilà un !”.  In this case, you’re not handing anything, you’re just pointing to an object you were just talking about.

This is another way of saying “mais bien sûr”, “avec plaisir”, “pas de problème”, “pas de souci”.  You use it as a positive response to someone asking you for a favor.  For example, if someone asks you at the end of a party “tu peux me déposer chez moi ?”,  you may answer “Sans problème ! Monte dans la voiture.”

When Alex hands Christophe a pen, Christophe says “merci hein !”  He could have just said “merci !”.  The addition of “hein” has an additional nuance, it’s like giving an extra thanks, suggesting the person is doing you a favor.  Saying “merci” alone is just being polite, “merci hein!” implies an extra degree of sincerity.  It’s a bit like saying “thanks a lot !”, “thanks for that !” or “thanks, really !”

Earlier in this simple conversation in French, Christophe says “merci beaucoup” after Alex lends him another object.  “Merci beaucoup” is a standard way of thanking someone, one notch above “merci” in the emphasis scale.  “Merci hein!” can be perceived as having a slightly higher emphasis level.  Christophe probably uses “merci hein!” instead of a simple “merci” because it’s the second favor he’s asking.

The idea of expressing extra gratitude through the use of “merci hein” is reinforced by Christophe’s adding “c’est vraiment sympa!”  We typically use this phrase when someone does you a big favor.  For example, if you ask someone “tu pourrais me prêter 20 euros ?” and the person lends you the money, you may respond saying “merci c’est vraiment sympa ! Je te les rends la semaine prochaine.”

You use this phrase when you want to borrow something from someone.  It’s an alternative to saying “tu peux me prêter … ?” or “tu n’aurais pas … ?”  In this simple conversation in French, Christophe keeps borrowing stuff from Alex, and uses various expressions for doing so.

Side note : French speakers go to great length to avoid repetition, often at the cost of clarity.  Repeating the same words or phrases at short intervals is typically considered a lack of elegance or sophistication.  To avoid this, French speakers often use paraphrases, often resulting in confusing sentences.

For example, if a journalist refers to Renault in a report, she will subsequently jump through hoops to avoid repeating “Renault” in the report even though the brand is the core of the subject.  She will say things like “la marque au losange”, which often leaves the viewer in a state of total confusion.

Alex uses this phrase to ask Christophe if he didn’t bring his own book.  Implicitly, he’s asking why.  For example, you’re having lunch with a colleague, and when comes the time to pay, he says to you “tu peux m’avancer 15 euros ?”  You’re somewhat reluctant to lend him money, so you respond by asking “tu n’as pas ton portefeuille ?”  You’re implicitly asking why he’s unable to pay for his meal.

This commonly used phrase indicates that you accept whatever the other person is asking you albeit reluctantly, after some hesitation or thinking.   In this simple conversation, Alex reluctantly agrees to lend his book to Christophe, but only after implicitly asking him why he doesn’t use his own book.  “Bon d’accord” suggests you finally agree to something that you initially didn’t agree to.

For example, someone proposes that you walk to a place a couple of miles away.  You feel tired, so you’re not so enthusiastic about the idea.  But the person continues to insist and you finally decide to go.  You may say “bon d’accord, on y va.”

Alex adds “pour l’instant“, implying he may need his book soon and is only lending it to Christophe for a short time.  The phrase clearly indicates Alex’s reluctance to lend his book, which is reinforced by the sentence that follows “mais tu n’as rien apporté en classe ?”.  The latter phrase indicates Alex’s astonishment and reprobation about Christophe not bringing his own stuff.

Christophe starts his sentence with “ben…” to suggest he didn’t mean to NOT bring his stuff to class, he just forgot to do so.  He pretends to be slightly embarrassed about it – although his shameless attitude seems to show the opposite.  The trailing “ben … ” is therefore somewhat of an act that goes in the way of manipulating Alex to obtain what he wants.

In this simple conversation in French, Christophe says “dis-moi” before asking yet another favor from Alex.  So in this case, “dis-moi” and the following hesitation “euh…” shows that Christophe knows he’s already been asking a lot, and that what he’s about to ask will probably too much.  But he attempts it anyway.

The correct form of this expression in spoken French is “non mais, ça ne va pas ?”  Here, “ça va pas ?” means “are you ill ?”, “are you not well ?”.  In other words, “are you crazy ?”  When preceded with “non mais“, “ça va pas” has an even stronger nuance.  The full phrase is used to express outrage and  indignation following something someone does or says.  For example, if someone pushes you rudely without even an apology, you may say look at the person and say “non mais ça va pas ?“

Alex says “tu n’as qu’à faire ton propre devoir“.  The spoken French expression “tu n’as qu’à…” is also often pronounced “t’as qu’à” in every day spoken French.  Here it means “you need to do”, “you have to do”.  What Alex is saying is, don’t count on copying off of my homework, you’d better do your own homework.  This idea is reinforced by the use of “ton propre devoir”.

The expression “tu n’as qu’à” is often used when someone asks you to do something when they should do it themselves.  For example, you ask someone to make some food for you : “tu me prépares quelque chose à manger ?”  The person may reply “tu n’as qu’à le faire toi-même !”