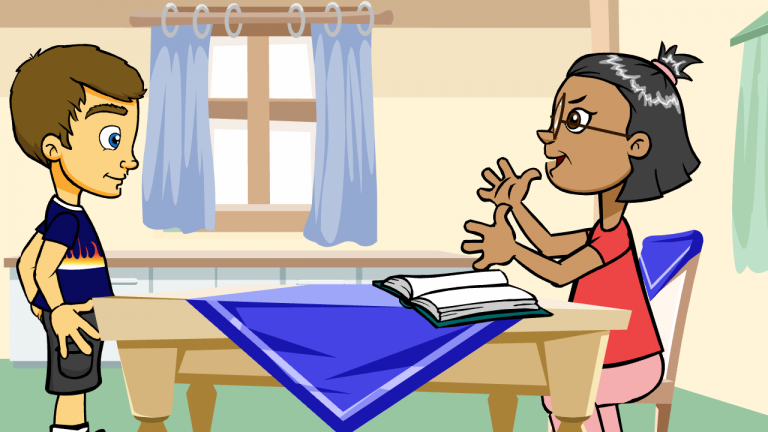 Véronique is sitting at a table drawing pictures. Justin comes in and starts questioning her about the drawings.  He suggests they are not very good and compares them with real pictures on his smartphone.  Justin keeps picking on her and Véronique is about to lose patience…

Go to the lesson

At the beginning of this simple French conversation, Justin comes in and says “Ah tiens !”  This expression is typically used in spoken French to show a slight surprise, for example when you see something odd or somewhat unexpected.  Justin didn’t know Véronique was here, so when he sees her he says “ah tiens !”.  It’s also a way to show Véronique he’s surprised to see her here.

At the beginning of this simple French conversation, Justin comes in and says “Ah tiens !”  This expression is typically used in spoken

We use this phrase when we find someone after looking for him/her without success, or to express the fact we needed to see this person but didn’t know where he/she was hiding.  For example, at work you may be looking for a colleague to discuss something that needs attention, but she’s not at her desk.  When you finally run into her you may say “ah te voilà, il faut que je te parle”.

Sometimes “te voilà !” is also used to mean “ah you’re finally here !” or ” I’ve been looking for you all over the place !” or “where have you been !”

In this simple French conversation, Justin says “ah tiens, te voilà !”  When combined together, “ah tiens” and “te voila” often express a combination of surprise and frustration for not having been able to find the person earlier.  The 2 used together strengthen the mood expressed by “te voila” alone.

French to show a slight surprise, for example when you see something odd or somewhat unexpected.  Justin didn’t know Véronique was here, so when he sees her he says “ah tiens !”.  It’s also a way to show Véronique he’s surprised to see her here.

We use “qu’est-ce-que tu fais ?” in many different ways, not always literally for asking someone what they are doing.  It can sometimes mean “what are you up to ?” or “what in the world are you doing ?”  In informal spoken French it is sometimes pronounced “kestu fais ?”, omitting the “que” syllable.

It’s also often used as a way to start a conversation.  For example, you arrive at a friend’s house for dinner, and find her in the kitchen putting the final touches to the dish she made.  After saying hello you may ask “qu’est-ce-que tu fais ?” to get the conversation started, even though you can see quite well what she’s doing.

This expression is used daily in simple French conversation.  The grammatically correct form, the one we would use in writing, is “qu’est-ce-que c’est ?” or “qu’est-ce-que c’est que cela ?”  In this phrase “ça” is an informal word that replaces “cela”, but “cela” is quite formal and rarely used in informal spoken French.

Likewise, “c’est quoi” is a very informal form and should generally be avoided in more formal situations, such as when taking to your teacher or your boss.  You typically use it when talking to friends and family.  For example, if a friend or colleague is holding a book, you may ask them “c’est quoi ?”, “c’est quoi ce livre ?”  or “c’est quoi ça ?“

In every day spoken French, starting an answer with “ben…” can mean a few possible things.  In this simple French conversation Véronique says “ben c’est une voiture !”  What she’s really saying is “it’s a car ! isn’t it obvious ?”, and is slightly annoyed by Justin’s question.  The “!” at the end of the sentence gives away the feeling expressed.

Justin later uses the same form when he says “c’est pas une fille, ça !”   The addition of the word “ça” adds to the ironic tone he employs.  It’s like saying “this thing ? That’s not a girl !”  For example, you show your friend the new tennis racket you just bought.  Being a professional player, he laughs and says “haha, c’est pas une raquette ça !”

Prefixing a phrase with “ça” adds emphasis.  Justin could have just said “c’est une voiture”, but by adding a leading “ça” he emphasizes the contrast between the car on his smartphone and the one in Véronique’s drawing.  It’s like saying “now THIS is a car, unlike yours !”   In the same way, further in the conversation Justin says “ça, c’est une maison“, showing a beautiful mansion on his phone screen.

Another example :  you’re watching some spectacular sports action and say ” ça c’est du sport !”, suggesting that other sports feats you’ve seen don’t compare with this one.

In this simple French conversation, Justin keeps asking questions about the objects Véronique is drawing.  As he moves on to the next drawing, he says “et ça“, as a transition.  It’s like saying “what about this ?” Again, the use of “ça” belongs to the informal French realm, in formal French you would say “et cela ?”

For example, you are at a friend’s home, she’s been out shopping and you’re looking at the things she bought.  As you check out each item, you may say “et ça, tu l’as payé combien ?”

After you’ve used “et ça” several times to go over a few  items, you may choose to vary the phrasing and say “et ça, là ?”  You may also use this phrase to more specifically designate an object that’s at a further distance.  For example, you’re commenting some paintings hanging on the walls in a room, and you want to draw the person’s attention to a painting further away.  You point to the painting and say “et ça là, [c’est toi qui l’a fait] ?”

That’s a typical phrase we use when someone says something meant to be funny, but we’re not amused and want to show it.  For example, you’re all dressed up and your friend says “tu as l’air d’une gravure de magazine !”.  You don’t appreciate the comment and you reply  “haha très drôle …“

Go to the lesson